Flu Hospitalizations Drop Amid Signs of an Early Peak

Flu Hospitalizations Drop Amid Signs of an Early Peak

It is starting to look much less like an epidemic as seasonal flu exercise “seems to be declining in some areas,” the CDC stated this week.

Declines in a couple of states and territories had been sufficient to decrease nationwide exercise, as measured by outpatient visits for influenza-like sickness, for the second consecutive week. This decreased the weekly variety of hospital admissions for the primary time this season, in response to the CDC Influenza Division’s weekly FluView report.

Flu-related hospital admissions slipped to about 23,500 through the week of Dec. 4-10, after topping 26,000 the week earlier than, primarily based on information reported by 5,000 hospitals from all states and territories. 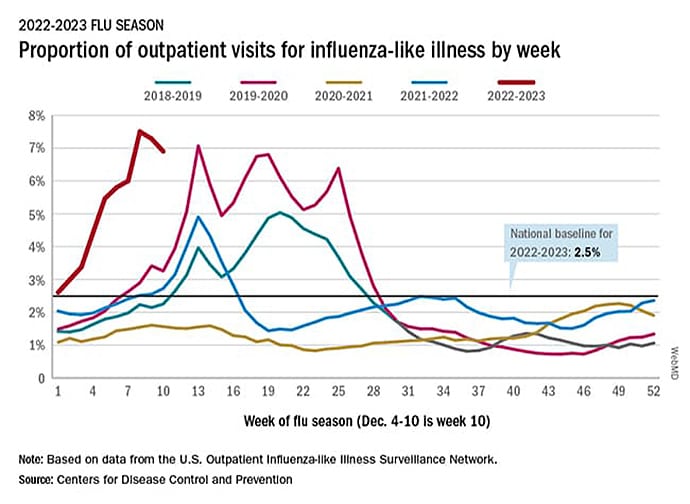 The weekly hospitalization fee tumbled from eight per 100,000 individuals to 4.5 per 100,000, which was nonetheless greater than some other December fee from all earlier seasons going again to 2009-10, CDC information reveals.

Visits for flu-like sickness represented 6.9% of all outpatient visits reported to the CDC through the week of Dec. 4-10. The speed reached 7.5% over the last full week of November earlier than dropping to 7.3%, the CDC stated.

There have been 28 states or territories with “very excessive” exercise for the newest reporting week, in contrast with 32 the earlier week. Eight states — Colorado, Idaho, Kentucky, Nebraska, New Mexico, Oklahoma, Tennessee, and Washington — and New York Metropolis had been on the very highest degree on the CDC’s 1-13 scale of exercise, in contrast with 14 areas the week earlier than, the company reported.